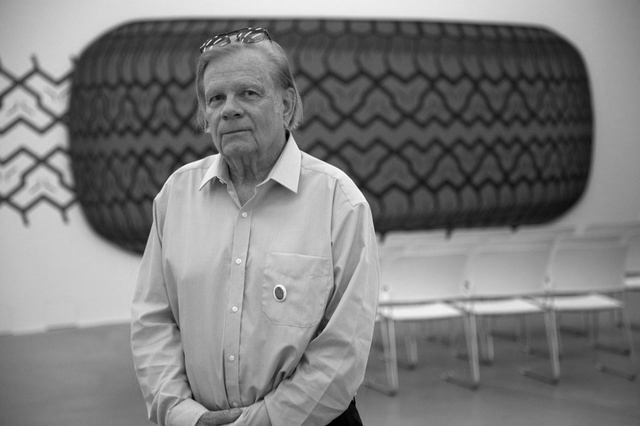 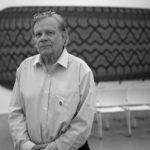 Peter Stämpfli (born July 3, 1937 in Deisswil, Switzerland) is a Swiss painter of the Pop Art movement. A major figure in 20th century painting, Peter Stämpfli has always scrutinized everyday life: our environment, our objects, our gestures. However, far from being satisfied with the simple appearance, his work has endeavored to reveal the depth and the strength that it contains. From 1963, the artist devotes himself to a work of inventory of all the repetitive details of everyday life, which he methodically fixes on a white background. The artist isolates, from 1969 until today, the pattern of the tire, emblematic of our industrial society; it quickly becomes his favorite theme and offers countless variations. Interview with an artist who appropriates his entourage in amazing simplicity to invent his own icons… an absolutely Pop art.

Where does this passion for painting come from?

I was born in Switzerland in Bern in 1937. I wanted to do graphic design and therefore I enrolled in an applied art school in Biel. Teachers made me realize that I was not in my place. I left this school two years later, then I had the chance to meet a painting teacher. This is how I started painting in the evening for myself; to make paintings instead of studying Latin and working on what really interested me.

In 1958 there was an important exhibition in Basel at the Kunsthalle about American abstract expressionism. It was the first time that this trend was shown in Europe. I had a visual shock, the impression of not being able to go back. As if I encountered a new dimension that paintings had and that I had never known. So I packed my bags and I came to settle in Paris. I didn’t know anyone in this city, but the enthusiasm I had for these American artists, including Pollock, Klein, Rothko and Newman, led me to buy rolls of canvas. I let off steam by making Pollock sous on large canvases six meters in size.

We must not forget that at that time, in Paris, lyrical abstraction was very present. After 1945, the Paris school was not very inspiring to me. So I started to take an interest in what was going on in the United States and England. I embarked on this adventure seeking to reintroduce the photo through painting. What interested me was the gesture and everyday objects. I started in 1963 when the vast majority of artists were part of the lyrical abstraction movement.

Why did you choose the daily object as your favorite subject?

I wanted to reintroduce the everyday object and gesture that make up our environment. Objects of total banality: a telephone, a washing machine, a fridge … I tried to isolate them in a sort of space, always on a white background, which in my opinion is more like empty space. When George Perec wrote the preface to my exhibition at the Georges Pompidou center in 1980, its title was Alphabet pour Stampfli, that is to say a dictionary of everyday objects and gestures.

What sets me apart from my French friends today is that I did not go towards narration, like narrative figuration which is a purely French event, but simply towards an analysis of the structure, an analysis of our life.

Then, you proposed countless variations on the automobile tire …

I actually got closer to the design of the car, synonymous of modern civilization and in which I found a certain geometry. In a way, I am a geometric painter even if I painted figurative objects. I applied this geometry to the wheels of cars. I looked at them like a photographer’s zoom. I entered it by enlarging it more and more, until the wheel became a virtual abstraction.

In 1969, I drew a two-meter tondo which was a pure geometric construction drawn on a canvas. She was freed from the chiaroscuro inspirations and the photography from which I was inspired before. Of this canvas, I simply kept the upper part which represented the tire that I enlarged. The first painting of this kind dates from 1969. Today is 2019. It’s been fifty years since I did anything other than paint on the theme of the tire, but exploring all of its variations. I was invited in 1970 to the Paris Biennale for which I made large six-meter tires. I then took the next step by painting the image of a six-meter-long tire on a 30-meter wall. I used the traditional method: an oil on canvas applied to a frame cut into the shape of the tire and which left its screen print on the thirty-meter wall: the object and its negative. Gradually, I got deeper into the image of the tire by representing only a few millimeters enlarged over six meters, thus bordering on abstraction. Then the tire disappears, leaving only the structures, positive and negative.

Unlike your Parisian colleagues, supporters of the narrative Figurative, you went towards a figuration, however, without adding narration, to gradually go towards abstraction… How do you situate your work between figuration and abstraction?

Today, the spectator who has not followed my work but who is attending one of my retrospectives understands where my adventure of the daily object started from through everyday and technological objects. These objects are the symbols of our civilization, like cars, which have led me to a kind of abstraction which is not, as Bernard Vasseur says, figuration inspired by abstraction and vice versa. I do not consider myself as an abstract painter, or a figurative painter neither. However, my object comes from figuration and industrial design.

In the early 1960s, I visited the Sonnabend gallery in Paris. Curiously, there have been similarities with artists like Roy Lichtenstein. The magazine Time and Life called me at that time to ask if I knew of a painting by Roy which represented a woman’s hand pouring detergent into a washing machine, similar to mine, and which he had produced in 1962 I replied no, but I used the same theme as him in 1963 when I did not know him. Following this, I went to New York to see Liechtenstein on Long Island. I showed him catalogs and he thought it was great that a young Swiss artist living in Paris could be interested in the same theme as American pop artists. However, I think my similarity to Pop-Art is more towards its English side, due to my more analytical side. However, although some of my paintings resemble American pop art, there is a big difference. I never represented Coca-Cola, I never celebrated a washing machine, a phone or a car. This is purely an observation.

For you, what is a masterpiece?

We all try to be honest, to approach a certain truth. Some people know how to approach it closer. It is possible to express yourself with multiple instruments and to realize yourself. Maybe something will remain from the personal experience of each artist. I think that time judges, that it is there to question things, to appreciate or to destroy.

Because the life without art is not the life.

I wanted to reintroduce the object, the daily gesture, that is to say our environment (...). What sets me apart from my French friends is that I did not go towards a narrative (...) but simply towards an analysis of our life.