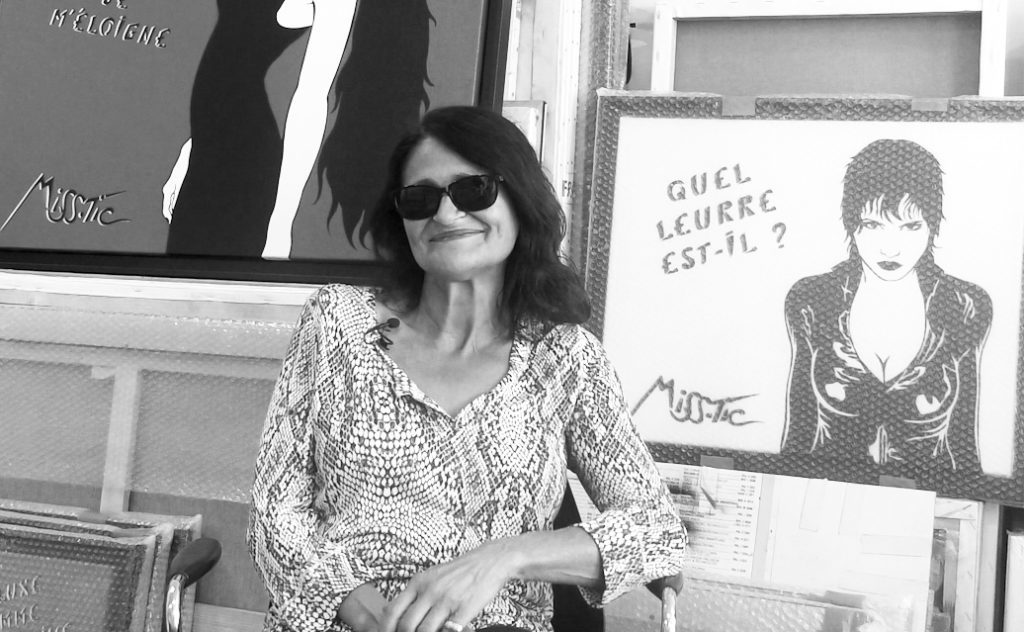 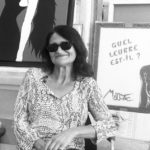 Visual artist, poet and emblematic figure of street art, Miss Tic has boldly displayed her creativity on the walls of Paris since 1985. Her drawings, made using stencils, reveal fatal women accompanied by incisive phrases mixing humor, lightness, and provocation. Imprint of freedom and above all passionate about poetry, she plays and mischievously defies words and develops a singular poetic and pictorial universe. Meeting with an icon of urban art.

How did the wall impose itself on you as an artistic medium in the 1980s?

Why did you choose the stencil technique as an artistic expression?

I chose the stencil technique because it is a fast and efficient means of printing which allows to multiply the images and texts in the city repeatedly.

You always associate text images. Where does this idea come from to accompany your aphorism images?

I decided to accompany my images with text, quotes, because all the artists expressed themselves only through images. It was a way of bringing originality, but above all I have a passion for poetry and literature. It was about showing something other than just pictures.

In love with words, who are the poets who inspired you?

Much younger, I was very influenced by the surrealists and then by the contemporaries. But the love of writing really comes from early childhood.

Your images are pretty stereotypical seductive brown women. Who is this femme fatale?

When I started to put text and images, it was very difficult to illustrate with the image of the text and vice versa. So I decided to find a spokesperson to report my quotes. At the beginning, I went on self-portraits that I quickly abandoned and I was inspired by the images of women that we are given to see in the media, advertising, fashion… I decided that this muse, the woman of today would carry my word.

A word that conveys above all the idea of freedom…

You leave little room for humans in your creations… Why?

Sometimes, there are men and couples. But it’s true that he doesn’t have the first role. In painting, generally, even male painters often painted women. It’s a bit of a tradition in painting.

You are often called as a feminist…

Yes, except that it’s a bit simplistic. I’m not only a feminist, I am also an anarchist, hedonist … I’m full of the feminine “ist” . And if I have something to add on feminism, I would say that I am even worse than feminist…

Is exhibiting in the street the desire, from your debuts, to make art accessible to all?

I already came from a movement called “theater on the street” which made lots of kids. Today there are many festivals and troupes. So I came from this generation in the 1970s who played on the street for the street audience. It is true that I have always been attracted to the popular arts and this direct contact with the public, rather than waiting for them to go to theaters, see now in exhibitions and galleries. It’s a way to get out there and make the practice more activist.

By marking your artistic identity on the walls of Paris, do you express a desire to become part of the memory of this city?

Yes, I have often said it, but my goal was also related to this megalomaniac side that artists have, above all to be able to survive, to be inscribed in the memory of Paris…

Following a conviction, you are now asking for authorization before intervening. What has that changed?

It is true that, as I was sentenced in 1999, I had to change my strategy if I wanted to continue to intervene in public space. Since that day, I have authorizations, but it is I who ask for them. When I work in certain boroughs, I actually go door to door.

Most of the time, the ground floors of cities belong to traders. So I’m going to see them to ask for authorization to intervene, but on condition that I get carte blanche. There is no order. I am free to paint what I want.

How did you experience this illegal activity? Was it an uncomfortable situation?

At the beginning, it was also part of the game. I started in 1985, when the city was hardly graffiti. There were very few things. We were really on virgin land. Before the tags arrived, around 1989, the first years, even the police wondered what we were doing and were not very repressive. The repression came at the same time as the tags and in a massive way. But it is true that at the beginning, we were little worried.

How has your work evolved over time?

Exhibitions and derivative products arrived very quickly. Six months after my first intervention in the street, my first exhibition was at Agnès. B in the Galerie du Jour. Agnes. B is very attentive to the emerging arts and so far this has allowed us to show ourselves publicly. Since then, I have not stopped making exhibitions and derivative products.

Do you have a favorite masterpiece?

One? I don’t have one in particular that comes to me… It’s rather the work of an artist in general that makes sense to me, and not a single work. But if I had to quote one, close to street art and which is linked to poetry, I would say the Rimbaud of Ernest Pignon-Ernest which crossed cities; this figure is very inspiring, especially because this artist has modernized it. He has a very fair vision…

What does it mean to be an artist for you?

For me, being an artist is a way of being in the world, of working in it. It is true that with my character and my temper, I had a lot of trouble staying under certain authorities. It is in the space of artistic creation that I feel most free…

For me, being an artist is a way of being in the world, of working in it. (...) It is in the space of artistic creation where I feel the most free ...