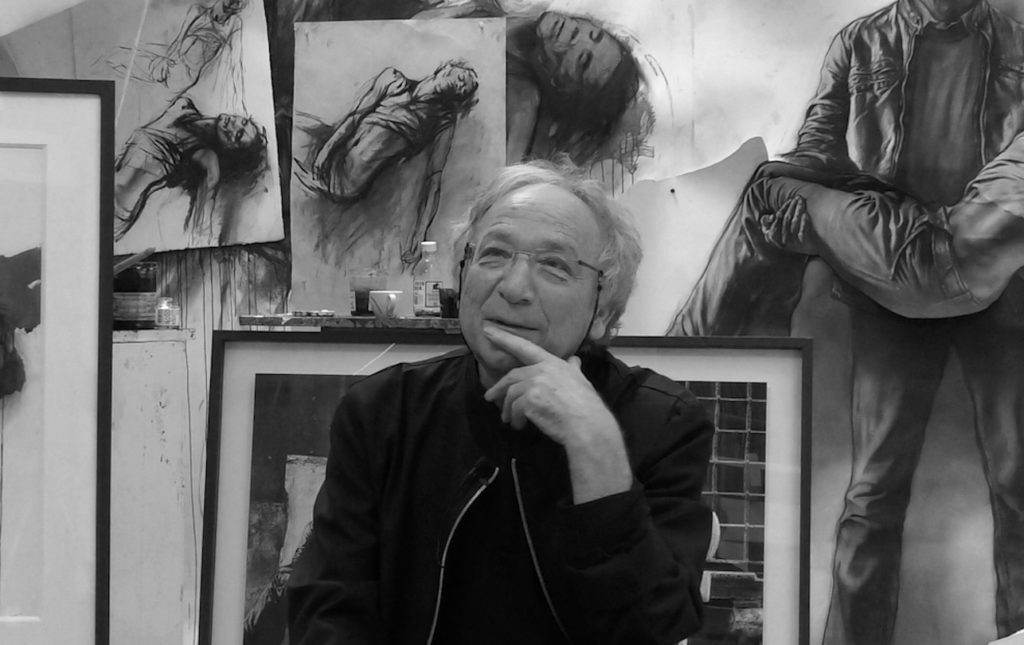 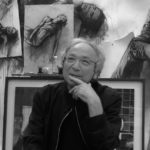 Today, Ernest Pignon Ernest welcomes us.  We modestly approach a a body of work with vaporous limits, which seems to encompass the entire world.  A homogeneous ensemble of virtuoso drawings made on the walls of cities, which speak of human pain and carry a heavy cartography of memories.  Having become contemporary icons, these figures suddenly come to life, grandly expressing their destiny, their hidden lives and their suppressed dreams.  With power and dignity,His workunites the forceful depictions of a humanity laid bare, with the relevance of their their locations.

Where does your passion for art come from?

It came very early. I made my first drawings around the age of twelve. I do not come from a particularly cultured background. At home, there were no paintings or books. My family was more interested in sports. As I loved to draw, I created the equivalent of postcards representing the bridge in my village, then I discovered Picasso in an issue of Paris Match magazine. It was almost a turning point in my life. I did not have any other clues at the time, but I saw that painting could be something else. My discovery Guernica has guided everything I’ve done since.

What ideas do you defend?

I do not think I’m defending any particular ideas. My work is more like a kind of quest to densify reality. That’s what I live. The inclusion of my images in certain locations aims to work these places visually; as well as exacerbating their symbolic potential, to make these places stronger, to densify their potential in order to reintegrate human history.

Who is your favorite artist?

Picasso. Paradoxically, I became an artist thanks to him. I do not paint, but if I started drawing my images as a space of intervention on reality, it is partly due of him, because I felt that after Picasso, all purely pictorial experiments were somewhat absurd. I still have that feeling.

But my sources of inspiration are reading and poetry (the works behind me represent Pasolini). He is a permanent reference for me, from an artistic point of view, through his sensual and physical approach to places, people and history. It is this physical character which, paradoxically, always reveals the sacred dimension of places.

I often seize the work of poets and their destiny because they often embody their time. Pasolini’s story, his assassination, the 800 trials he underwent are a testimony of late 20th century Italy, just as Pablo Neruda embodies Chile, the Cordillera, the Pacific and all Latin America.

When do you feel the moment of creation?

In drawing, there is always more than what is shown: there is a project. A drawing carries with it a perspective that associates with the viewer in a different way from painting. Unlike the latter, he remains constantly in the making. If you show me a painting, I can date it by around fifty years, but I could never do that with a drawing.

Does the moment of creation appear at night? When the idea comes to me?

When I realized that Pasolini had been dead for 40 years, I wanted to create an image that would represent him by wonderingwhat we had done with his messages, what he had told us. It took me a long time to understand that I was going to create an image that would show him him carrying his own body. It was a creative moment because for a long time I did not know how to express what I was looking for.

I should have thought of it earlier, because in all of his work, this idea of the double was always present, as it was Nerval in fact. That was a moment of creation.

I did have to fight for weeks to make the drawing, to get it right, so that the body was not too realistic, that it is a sign. Sometimes all of this overlaps. But for me, the real moment of creation is when I install the image in the location I imagined it in, at the time I imagined. (In this case, in Matera, where he shot the Gospel according to St. Matthew).

The moment of creation is the conception of my drawing and its installation in a place where the image takes its full meaning and sensitivity.

Because life is not enough? [Laughter] That’s what I try to say about my work: art makes it possible to densify reality, to reveal it. You know, we walk through the same places every day, they become trivial, we do not know how to look at them anymore and suddenly, when I install my images, the place appears different, as if it had been reactivated. Art is a bit like that, it disturbs reality and densifies it, exacerbates it, makes it stronger. It allows us to understand it. My job is a quest for understanding. Ultimately, I address some themes to know them better and to intervene on them. Art allows us to do that: in short, to disturb and clarify.

What is your view of our society?

I share the point of view that Pasolini announced, this dehumanization, this acculturation. I think that art is really indispensable, poets are necessary, fine art has a dimension that has been completely misguided. If I had a critique to make on today’s society, it would be regarding this kind of general amnesia. If we do not know where we come from, we do not know where we are going. The choice of drawing is almost an ethical one in this stream of superficial images that merely last a thousandth of a second, and are almost moral scams. Drawing may be a choice of humanity. There is no distance between thought and hand.

What are your dreams?

I read Nerval’s Aurélia again yesterday. The theme of this novel is the sliding of successive follies that constitute dreams within reality. I have decided to create a book working from this issue.

Try to seize reality in all its complexity and insert a fictional element that will reveal it, disturb it. I think it was Robert Fillou who said, “I would like to make an art form that would make life more beautiful than art. “

Art can disturb the real, densify, exacerbate, make it stronger.