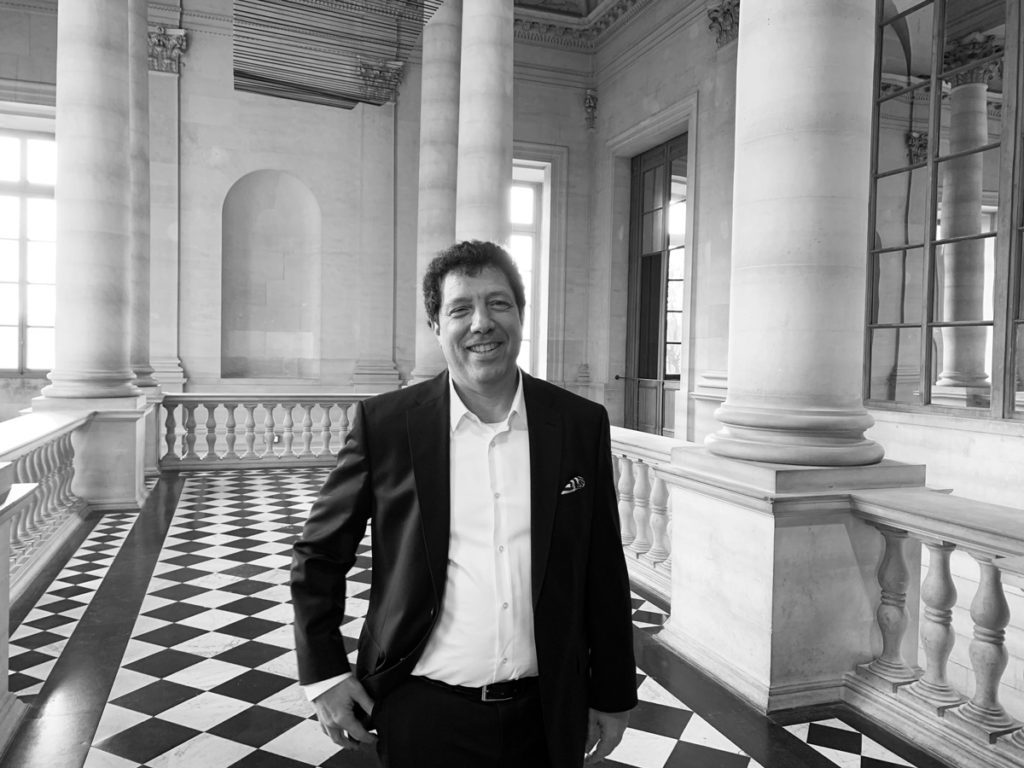 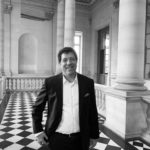 Artist Elias Crespin was asked to design the first kinetic artwork to enter the Louvre museum. His permanent sculpture is installed at the top of the Escalier du Midi staircase, at the southeast corner of the Cour Carrée. Controlled by a computer, L’Onde du midi is composed of 128 metallic tubes, comes alive, undulating randomly, thereby creating a poetic and ethereal choreography, switching from order to chaos … The honored Venezuelan artist now joins the ranks of other great contemporary artists who have integrated the Louvre such as Anselm Kiefer, François Morellet and Cy Twombly.

How did you receive the commission for a permanent piece at the Louvre museum?

In 2018, I took part in the “Artistes & Robots” show at the Grand Palais in the thanks to Miguel Chevalier who put my name forward to the exhibition’s curators, Jérôme Neutres and Laurence Bertrand-Dorléac. They in turn suggested I use the grand staircase area to hang one of my pieces.

It was complex, and technical challenge to install my work there because there was only one suspension point for an otherwise large space. For the work to have relevance in this location, it needed to be large. The management of the Louvre museum saw this piece, called Grand HexaNet, while visiting the “Artistes & Robots” show, and thus the idea of ​​having a similar type of work in the Palace of the Louvre museum was born.

Which characteristics of your work needed had to be expressed in order to integrate such a prestigious and formal venue as the Louvre?

In general, I work with very simple geometry, lines, circles, even triangles and squares. I line them up, assemble them, make them concentric or intricate… So the shapes are usually simple and refined, we could say ‘elegant’ in the sense of achieving a goal with minimal resources. I use as little visual resources as as I can: simply the movement of the line, to explore the world of motion and matter moving in time.

Were the Louvre’s classical architecture and light at all decisive in the design of L’Onde du midi?

In this context there are the columns. I decided I had to make a work including cylinders, and I had several ideas. This was the most effective way of placing it: with a rectangular platform like this one, very refined and as integrated as possible to the architecture; the conditions allowed me to determine the choice of a flexible and wavy panel, as well the color that contrasted well with the very soft tone of the architectural space.

Your creations question concepts of form, space, movement and time … Are you looking to make the invisible visible, to show abstraction?

I believe that I create “real virtual reality”; I imagine all these choreographies, which are then saved in the computer’s memory. It’s something we don’t see; the work is recorded. So as you say, it is invisible. Software runs in a computer’s system, but software can generate electric signals that come through the entire circuit to the motor, and then move the motor in relation to this recorded dance; in turn, the suspended elements of the engine move in such a way as to make this invisible dance appear from the computer.

Do you think the presence of digital technology that drives the work raises the question of its reliability and durability?

First of all, we set up maintenance and repair procedures with the department in the museum in charge of the piece. There is basic maintenance such as dusting, as well as more technical but feasible maintenance. Then there is the obsolescence of the various components, which we cannot anticipate ahead of time. For instance, the sculpture is ordered by WiFi. The piece is connected and remotely controlled by WiFi, stopped and started by WiFi.
In fifty years, will WiFi still exist or not? We don’t know, but there will be an evolutionary path between WiFi and the next wireless communication system. We will have the authorizations (from my part) and the procedures to make these adaptations.

This piece is representative of your approach which combines two realms: art and science. How did this encounter between a scientific approach and artistic creation come about in your work?

I studied computer science at school, then a lot of mathemathics and computer graphics. One day, I stumbled across Jesus Rafael Soto’s Cubo virtual while visiting the retrospective exhibition of my grandmother, Gertrud Goldshmidt, at the Museum of Fine Arts in Caracas. It was on the first floor staircase, just outside the exhibition, and in front of that cube, I thought, “This is beautiful.”

I made the connection between this cube, which I saw as a three-dimensional space where functions could be graphed, and the way in which we can alter time to create a movement; I said to myself “maybe I’ve got something there”.

Is l’Onde du midi breaking with or extending kinetic art? Does it demonstrate a will to explore new territories?

What do you wish to offer the public? surprise, astonishment, a moment of delight or reflection?

The conception of my work is the results of my experience, my perception, my desire for movement, dance, visual sensuality. And there I stop. I know, of course, that this perception will have an echo, a resonance with the visitor; but I am not trying to produce an effect or impose a particular experience. I present my work, my idea and I let things happen …

For a contemporary artist, receiving a commission for a lasting piece by the Louvre museum is an extremely rare occurrence. What is your feeling?

I do not even know. It’s an honor… it’s an artist’s dream. Having a whole museum organization that will watch over my work, presented in this spectacular way, forever, it’s incredible … Ars longa, vita brevis [Art is long, life is short].

I think art is a way of expressing oneself in one’s own language, and it can have many different manifestations according to the artist. I chose this way of presenting my inner reflection, my abilities and my humanity. I hope, as an artist, that it will inspire people, and to inspire people is to motivate them to do things constructively, and to give them hope. And hope is very important, it’s fundamental …

The conception of my work is the results of my experience, my perception, my desire for movement, dance, visual sensuality.