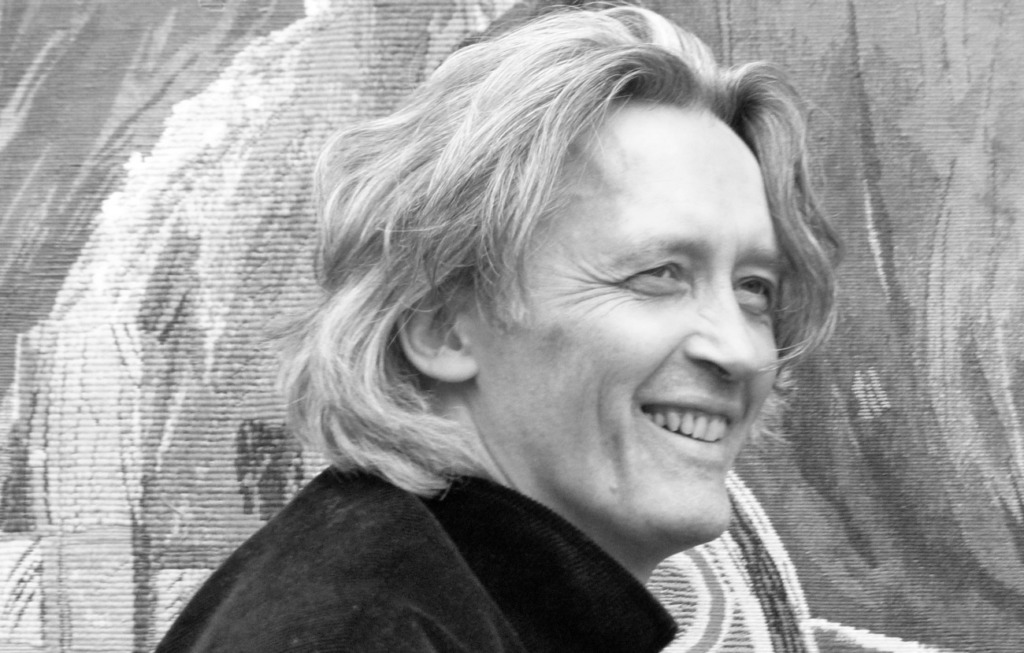 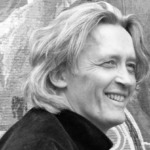 Christophe Tissot is an artist whose works are multifaceted and multiform. He expresses himself on a grand scale in the pictorial field as well as in the applied arts, such as murals, contemporary tapestry, and artist’s jewellery. Trained from boyhood in the Decorative Arts Workshop at the Louvre, very early on he was spotted by the world of luxury goods, for which he would create many window displays and installations internationally. A politically and socially committed artist, he would later distinguish himself through his artistic interventions in projects designed for public spaces.

Turning his back on the dominance of the conceptual movement, his large paintings on paper are an invitation extended to a thaumaturgic imagination to daydream and reminisce. His work strives both to conjure up a lost liaison with the natural world, and question our archetypes, drawing on symbolism, narrative figuration and abstraction all at once.

A childhood cradled by your parents’ artistic world…

I was lucky enough to have a father who was a chemical engineer in the pulp and paper industry, an amateur violinist from the age of seven, and a man with a deep love of art and painting.  My mother also had a sensitive artistic bent. My parents, my twin sister, my older brother and I all lived on the aptly named, 7 rue Albert Gleizes, in the Créteil Mont-Mesly housing project.

At that time, I often went to the local Maison de la Culture, brainchild of André Malraux. My parents were keen activists of the communist party, very open to a certain popular culture, impervious, on the other hand, to reading Solzhenitsyn or the Sakharov trial… Those were the days of Jean Villard, Maurice Béjart at the Festival of Humanity [organized by the daily newspaper L’Humanité, organ of the communist party], Jean Lurçat, the Algerian and Vietnam wars, and the coup d’état in Chile that toppled Allende.

Our house still didn’t have a television. So there was lots of talk to the strains of Aragon, sung by Jean Ferrat, Juliette Gréco, Colette Magny, Barbara, Mouloudji, Yves Montand, and Léo Ferré, songs of the Paris Commune, as well as the whole repertory of classical music. I loved that great musical ferment of the 1960s, which was culturally so rich. So, for me, who had spent my youth on a housing estate and then in the suburbs, music was art within earshot. On the other hand, at home we never played Claude François, Johnny Hallyday, Elvis, or the Beatles… I can safely say that, as a teenager, I suffered from that “cultural censorship”, but it was something that gave me food for thought.

Then what happened that led you to become a painter?

Afterwards, from the age of 10, I had a safe haven, a place of immersion and apprenticeship at the Workshop for under-fifteens at the Museum of Decorative Arts, run by Pierre Belvès, with Jean-Claude Reynal heading the engraving workshop, and Valentine Schlegel in the ceramics studio. The three workshops were located on the ground-floor of the Pavillon de Marsan, where a free and industrious atmosphere reigned. I stayed there until I was 23.

It was a magnificent place. Pierre Belvès had a unique way of speaking to children. He taught me how to see and how to let my imagination be expressed on all kinds of subjects. His teaching left its mark. Later on, he chose me to be his assistant: that was the first step in my career as a painter.

Pierre Belvès had a unique way of speaking to children. He taught me how to see and how to let my imagination be expressed on all kinds of subjects. His teaching left its mark.

Your painting wavers between figuration and abstraction. What do you want to get across by combining these two languages?

That’s quite true, I do paint straddled between figuration and abstraction. They go well together like the two hemispheres of the brain. I’m on the bridge that connects them, and on this bridge I go fishing for images. There are painters who prefer setting up shop on the right bank, and others on the left bank. I like being an observer in the middle, and then, when the time is right, diving in and heading for that open space which is the large brain, the nursery that nurtures imaginations.

Since the Impressionists, the quarrel between figuration and abstraction has been a lengthy and much discussed story. Today, that clash no longer makes any sense. They are exchangeable, interchangeable terms, and everyone can do what they want with them. There are obviously times when I veer right or left, but once again I don’t assign any basic preference to those two areas. It’s just the pictorial form that develops slightly differently, not the intent.

Since the Impressionists, the quarrel between figuration and abstraction has been a lengthy and much discussed story.

Through their enigmatic colours, forms and entities, your paintings invite the viewer on a journey along the shores of dreams.  Why is that?

“Don’t wake up the painter, he’s dreaming, and dreams are sacred”. I jotted down this Aragon quote almost 40 years ago. I was dreaming about a new and different kind of painting, I didn’t know much about dreams, and even less about things sacred. I just had a hunch that there was something true in that story. From the word go I immediately associated the idea of beauty with the idea of sacredness, rejecting any defence of ugliness and terror. At that time I was against the great subjectivist trend that claimed that all things were of equal merit.

Since then I’ve stopped being against such things. Opposition stands in the way of dreams. A certain detachment is called for. This detachment isn’t a sign of indifference. It’s just a gap, a little side step, the way cats and dancers do it so well. It’s a slight shift in appearances which makes it possible to reach the no-man’s-land occupied by dreams, the place where the painter goes looking for dreams to turn them into images. How many times have I heard people comfortably sitting in reality’s leather armchairs say that “I was a dreamer” Others, luckily more sensitive, like getting closer to the painter’s dream.

I’ve painted lots of “dreamers”, and all my paintings are intentional daydreams. The image does not emerge without a patiently prepared loam. When the daydream is possible, the image emerges from that compost of memory and emotion, the painter wakes up, and catches the apparition. This is the final stage that justifies the painting. In this transitional area, the artist learns how to use his senses, but dream time is not the same as real time. When I think I’ve been working for a few years, forty years have elapsed in the other world. Having your head in the stars and trying to come back down to earth, therein lies the whole art of painting. Dreams are an antidote to reality’s supremacy. There’s now a huge gap between the world carrying the painter and the world carried by the artist. Painting is an endangered ecosystem which hasn’t had its last word, because unexpected truths can still emerge from this in-between world.

“Don’t wake up the painter, he’s dreaming, and dreams are sacred”. I jotted down this Aragon quote almost 40 years ago. I was dreaming about a new and different kind of painting

Which artists and figures have inspired you in your approach to art?

I like Hundertwasser for his understanding of nature, and Jacques Callot for his sense of observation.
Rembrandt for light.
Chardin for his sensual hand, Vermeer for his sensuous touch.
Vincent Van Gogh for his passion and courage, Modigliani for his gentle melancholy, Lucian Freud for his generosity.
Picasso for his many periods and his assumed eclecticism.
Zurbaran and Goya who are the two Spains,
Miró and Dali who are the third. Jakuchū the miraculous Japanese artist, Hokusai, Hiroshige, Utamaro and Utagawa.
Courbet and his nature,
Combas and his rough force.
Ensor the Belgian, Matisse the colourist, Persian miniatures, Séraphine de Senlis, Egon Schiele, Toulouse Lautrec, Monet, Kandinsky, the Lascaux painters, the Expressionists…

I don’t actually have any favourite painter, I just have countless preferences. A painter’s life is eminently laudable, which is why I admire them all, be they well-known or unknown. France has no monument to the unknown artist.

Painting is an endangered ecosystem which hasn’t had its last word, because unexpected truths can still emerge from this in-between world.

What would a life without art be like? Isn’t the human being, perceived in all his utopian fullness, destined to become a work of art, synonymous with peace and plenty? A caterpillar which turns into a butterfly. It’s all about sap, vitality. Art nurtures, a life without art offers a world where intelligence becomes artificial.

I’ve always thought that painting can be the link between differences, cultures, clans, forms of knowledge, forms of apartheid, and the forms of solitude we pass through. Canvases can become those windows giving onto a space where the gaze can slip away, and through which intelligence regains a reflection of itself which it thought forgotten and lost.

This, incidentally, is why, between 2005 and 2010, I organized a permanent show of 32 large works, in the new cancer centre at the Bretonneau CHRU [University Research Hospital] in Tours. That set of works, a first in France on that scale, made it possible to bring together the building’s various specific departments (consultation, hospitalization, lecture room, library, a floor earmarked for teachers). During that project, I realized how much the hospital staff, doctors and families all appreciated the presence of art in such a sensitive and compassionate place. That five-year experience demonstrated the beneficial effects that art alone can have.

We’ve just lived through a totally unprecedented and novel period in France, in Europe, and in the whole world, entailing a lockdown designed to counter a pandemic that’s been going on for two months, and which has also confirmed certain realities:

*The vital recourse to art and artists to help us put up with having to lock ourselves away in our own homes.
*The importance of positive artistic creativity.
*The extremely fragile nature of art and artists in an economic system struggling to comply with the famous 1% of the national budget devoted to art in public buildings.
*Last of all, the societal role of art, which implies a choice of social model.

It’s all about sap, vitality. Art nurtures, a life without art offers a world where intelligence becomes artificial.

Do you think the contemporary artist is free?

All artists strive for emancipation, with one foot fettered by constraints and the other on the road to freedom. We proceed at a limp; at times we manage to take wing. This question is not a simple one, and freedom is perhaps doomed to remain a question mark. It’s a precious thing that is indefinable, it’s a right and a duty, an impassive force, a movement of body and mind.

We might couch the issue as follows: for as long as the artist works without upsetting anything on consensual works, we let him be. On the other hand, when his way of looking at things changes, and when he attunes his work to this new vision, obstacles may get in the way and endanger his freedom.

In my view, the contemporary artist isn’t completely free, he aspires to become free.

Christophe Tissot is represented by The Galerie Cipango.

It’s a slight shift in appearances which makes it possible to reach the no-man’s-land occupied by dreams, the place where the painter goes looking for dreams to turn them into images.